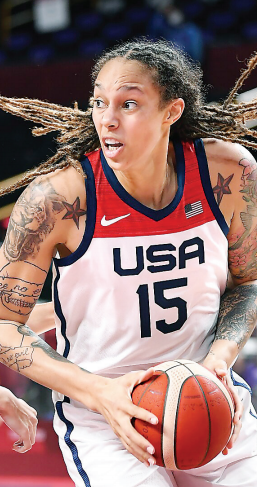 It’s hard to imagine the feeling of dread Cherelle Griner experiences each day that her wife, NBA star Brittney Griner, is wrongfully detained in a hostile nation with a long history of persecuting LGBTQ people.

When a scheduled call on their wedding anniversary last went unanswered 11 times over several hours, Cherelle was devastated.

“This would have been the first time for me to actually just hear her in real time and to truly know if she’s okay or to know if she’s seconds away from not being in existence anymore,” she told the Associated Press.

As Brittney Griner’s detention in Russia surpassed four months, the National Urban League joined more than 40 other civil and human rights organizations to call on President Biden and Vice President Harris to strike a deal for her release.

In a letter to the President and Vice President, we acknowledged Griner as an American hero, wife, daughter, sister, teammate, anti-bullying advocate, Olympian, and WNBA superstar who is enduring inhumane treatment, deprived of contact with her family.

“We join Brittney’s family, friends, colleagues, and loved ones in deep appreciation of your Administration’s ongoing efforts to secure her freedom,” we wrote.

“The U.S. Government has acknowledged that Brittney is essentially a political pawn in classifying her as wrongfully detained. While these have been critically important measures, we now urge you to make a deal to get

Brittney back home to America immediately and safely.”

Last month, the U.S. Department of State officially reclassified Griner as “wrongfully detained,” signaling a significant shift in the way the agency handles her case.

While one of the criteria for the designation is “credible information indicating innocence of the detained individual,” the change means the U.S. considers any legal proceedings in the Russian courts to be irrelevant to her case.

Russian prosecutors claim illegal vape cartridges containing hashish oil were found in her luggage as she entered the country.  She has not formally been charged.

The lack of publicity in the early weeks of her detention has become a source of controversy. On Brandon Marshall’s SiriusXM podcast I Am Athlete, WNBA legend Lisa Leslie said women’s basketball players were instructed not to “make a big fuss about it so [Russia] could not use her as a pawn .”

However, many suspect the WNBA was concerned that the case would draw attention to the league’s dismally low salaries compared to other sports leagues, which is the reason Griner was in Russia in the first place.

Few athletes embody the spirit of goodwill more than Griner. When she saw unhoused people in Arizona walking outside without shoes on her way home from practice, she began carrying shoes in the trunk of her car to give to away, an effort that led to the establishment of  BG’s Heart and Sole Shoe Drive in 2016.

She is an outspoken anti-bullying activist, and she’s been honored by GLAAD  and the Human Rights Campaign for her work defending the rights and dignity of LGBTQ individuals.

Her ongoing detention is an indefensible and agonizing attack not only on Griner herself, her wife, and her family, but on the sanctity of sport and the safety of all athletes traveling to compete internationally.  President Biden and Vice President Harris must make every effort to bring her home immediately.

Marc Morial is president and CEO of the National Urban League.