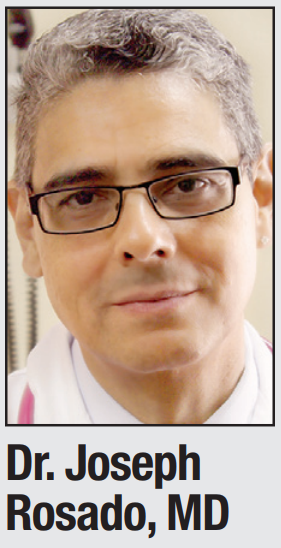 This commentary is provided by the Medical Marijuana Education and Research Initiative (MMERI) of Florida A&M University.

You have probably heard the criticism that marijuana is a “gateway drug,” meaning it’s the first step on a path leading to more potent and addictive narcotics that yield stronger psychological or physiological effects.

Dr. Joseph Rosado, an Orlando internist and qualified medical marijuana physician, passionately disputes that claim, dismissing it as an orchestrated lie that has been perpetuated since the early 1900s to demonize cannabis.

If marijuana is a gateway to anything, he counters, it’s a life with less dependence on pharmaceutical drugs.

“For years, we’ve been lied to in believing that cannabis is a gateway drug when in reality it has proven to be an ‘exit drug,’ getting you away from all of these medications that cause greater harm than good,” said Dr. Rosado.

“Contrary to heroin, alcohol, cocaine, amphetamines, that every time you use them you need a higher dose to get the same effect; it doesn’t work that way with cannabis.”

Dr. Rosado considers himself a “pioneer in the medical cannabis community,” which is an accurate description when you know a little more about him.

He was involved in Orlando attorney John Morgan’s failed 2014 and successful 2016 medical marijuana amendment initiatives, often acting as a Spanish-speaking advocate for those ballot efforts.

When medical marijuana be- came legal in Florida, he was the first qualified physician in Central Florida to recommend — doctors cannot prescribe — medical cannabis to an adult patient and the first in the state to do the same for a child.

He works with such advocacy groups as CannaMoms, Florida Cannabis Coalition, and Minorities for Medical Marijuana, the latter as its medical director. He’s also the medical director of marijuanadoctors.com, a repository of information written for physicians and consumers.

In his book, “Hope & Healing, The Case for Cannabis,” Dr. Rosado admits he “previously never supported the full legalization of cannabis, but it now seems this may be the only effective way to ensure full effective treatment of patients.”

A patient he first saw in December 2017 for evaluation as a candidate for medical cannabis treatment would surely agree with the last part of that statement. She is living proof of Dr. Rosado’s insistence that cannabis is an “exit drug.”

To get her through a day she took a buffet of prescription medications, 42 to 58 pills, including addictive painkillers.

“Her life revolved around her cell phone alarm, letting her know when she needed to take her next dose,” said Dr. Rosado, who set out to wean the patient off of pharmaceuticals.

On Feb. 12, 2018, the patient obtained a medical marijuana card from the state, and Dr. Rosado “recommended” she be- gin following a cannabis-based regimen that included taking CBD oils orally, as well as vaping them, and smoking different kinds of “flowers,” the smokable part of the cannabis plant.

Over the following seven months the patient’s physical and mental health improved as she used fewer and fewer medications. She was no longer experiencing tremors and seizures; her lower extremity edema had vanished.

She went back to work and began volunteering at her church. She quit smoking, lost 30 pounds and could, once again, sleep through the night. By September she was down to three pills a day.

Dr. Rosado says he’s seen similar results in hundreds of his medical marijuana patients young and old, from the 7-year-old with epilepsy to the 104-year-old with Parkinson’s. But such successes would be unlikely for anyone trying to self-medicate with street-level marijuana, he warns.

“They don’t know what they’re getting in that dime bag in the black market or who they’re buying it from,” he said.

“They should find one of the 2,500 physicians in the state of Florida who are certified to recommend medical cannabis, make an appointment with them, and have a sit-down face-to-face conversation, per state law.

If their health situation qualifies, the physician will put them in the state medical marijuana registry and get them on the road to health.”