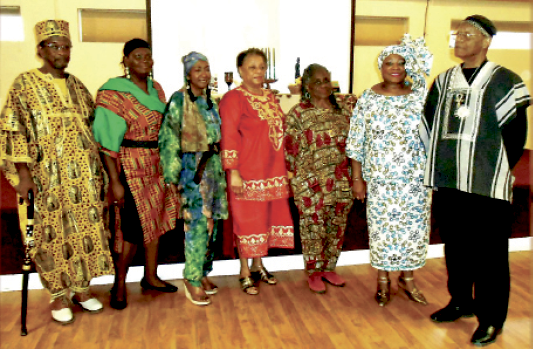 A Kwanzaa celebration reinforcing the seven principles, or the Nguzo Saba, was held Dec. 29 by the Cultural Committee of the African-American Cultural Society.

It reached many that filled the seats – a marketplace for vendors – and through cultural entertainment, acknowledged our African heritage.

The celebration resonated another annual Kwanzaa at the African American Cultural Society, emanating since 1991.

Dr. Maulana Karenga of the Black Studies Department of California State College, Long Beach, created Kwanzaa in 1966. Kwanzaa is defined as “First Fruits of the Harvest.”

A candle, celebrating each day of Kwanzaa, is lit from Dec. 26 through Jan. 1.

“The red candles represent our struggle, or the blood that we have bled – or in Garvey’s words (Marcus Garvey), our struggle for equality, freedom, empowerment and political unification,” said Brown.

The green candles signify hope for the future.

Brown and his wife, Wilhelmina, lit the mishumaa saba (the seven candles) symbolizing the principles of Kwanzaa.

The Browns’ daughter, Edwina, scaled the depths of Kwanzaa, and said, “It was a communal value system that would aid us in our struggles to be ourselves, to free ourselves as African people, and make our own unique contribution to the four globes of human history.”

The 12-year-old highlighted the fourth day of ujamaa (cooperative economics), which was paramount to celebrating Kwanzaa at the African American Cultural Society.

“Ujamaa involves the call and commitment to build and maintain our own stores, shops, and other businesses, and profit from them together,” said Edwina.

Committee member/curator Meshella Woods, focusing on Halena Wilson, president of the Women’s Auxiliary to the Brotherhood of Sleeping Car Porters, offered that “the Negro in 1942 should unite his forces and pool his funds for the common good of all.’’

Among the sightings of cooperative economics in African-American history, civil rights activist Fannie Lou Hammer ascribed in the 1970s that “cooperative ownership of land opens the door to many opportunities for group development of economic enterprise” …and establishes “economic independence in the face of economic and political discrimination and retaliation,” said Woods.

“And so that means, as an individual, we can’t accomplish as much as we can as a village. And, that’s the full theme of cooperative economics – starting to think not as I, but as we,” said cultural chair Brenda Andrews.

Entrepreneurial vendors also were on hand for the crowd to support our Black businesses.

A weekend of films in Flagler

Organizers Kathryn and James Barry made the announcement of the amazing 55 independent films at the upcoming festival, ranging from two-minute micro-shorts to two-hour feature films. Films from 16 Florida filmmakers, including films from around the world, will be screened.

The Barrys are thrilled that the legendary Burt Reynolds will star in “Miami Love Affair,” a romantic comedy filmed entirely in Miami with a local cast and crew.

There’s Lance Reddick in “Lawman,” directed by Matthew Gentile, plus the Emmy-nominated Robert Picardo of “The Wonder Years” will be screened in “Occupants,” directed by Russ Emanuel.

As always, remember our prayers for the sick, afflicted, the prodigal son, or daughter, and the bereaved.