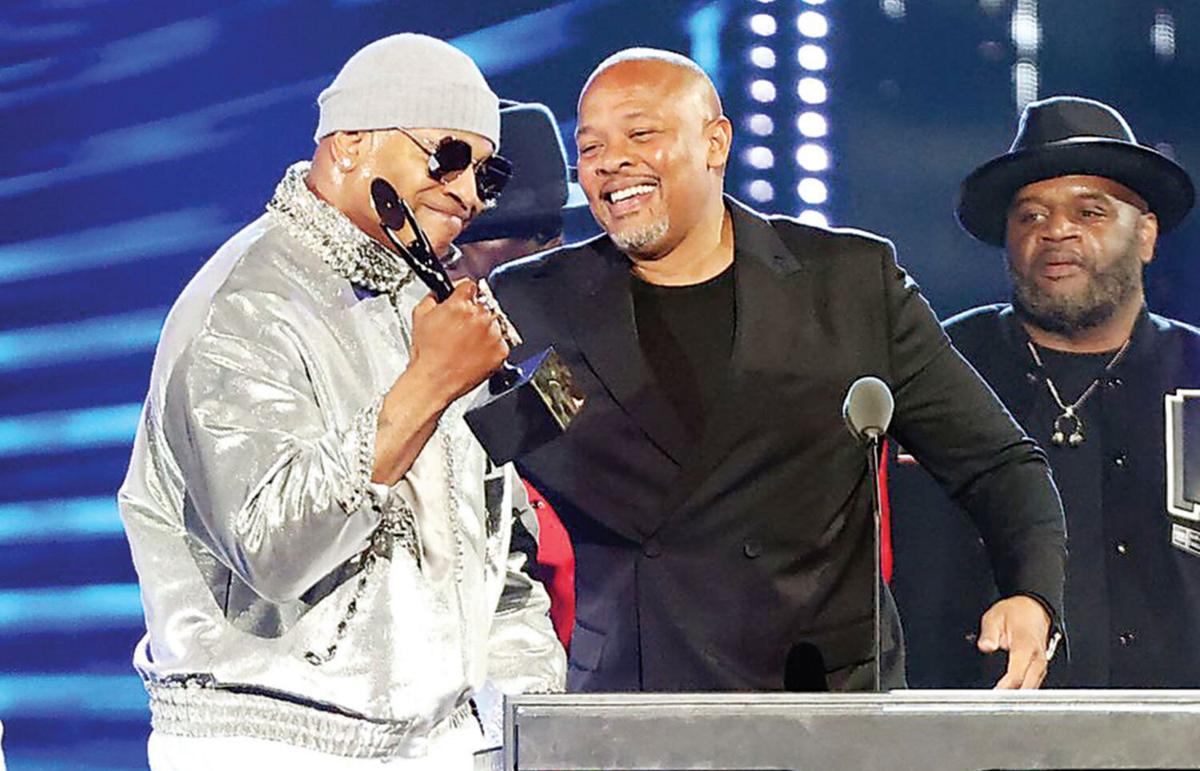 Dr. Dre presents LL Cool J with the Musical Excellence Award at the 2021 Rock and Roll Hall of Fame and Museum Induction ceremony in Cleveland on Oct. 31. 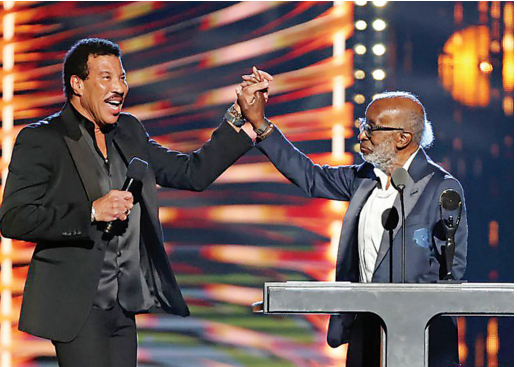 Lionel Richie presents the Ahmet Ertegun Award to Clarence Avant at the 2021 Rock & Roll Hall of Fame and Museum Induction ceremony in Cleveland.

Once a drug dealer on the tough streets of Brooklyn, New York, Jay-Z rose through the rap world with hard, straight-forward songs that often portrayed the struggles of Black people in America.

His catalogue includes songs like “Hard Knock Life,” “99 Problems” and “Empire State of Mind” as well as 14 No. 1 albums.

Following a video introduction that included President Barack Obama, LeBron James and David Letterman, Jay-Z was inducted by comedian Dave Chappelle, who praised him for being an inspiration.

“He rhymed a recipe for survival,” Chappelle said. “He embodies what the potential of our lives can be and what success can be.”

Paul McCartney welcomed Foo Fighters, who have carried the mantle as one of rock’s top arena acts. Initially, the band was little more than a side project for front man Dave Grohl, who was previously inducted as Nirvana’s drummer.

McCartney described the parallels between he and Grohl as both were part of massively popular bands who broke up.

“Do you think this guy is stalking me?” McCartney joked.

Foo Fighters and McCartney closed the show with the Beatles’ “Get Back.” Rapper LL Cool J was enshrined for musical excellence along with keyboardist Billy Preston and guitarist Randy Rhoads.

Cool J recruited some of his heavyweight musical friends to usher him into rock immortality. One of rap’s and hip-hop's first superstars was joined on stage by Eminem and Jennifer Lopez for a powerful, career-spanning performance.

A medley of hits

“What does LL really stand for?” asked rapper/producer Dr. Dre in his induction speech. “Ladies love? Living large? Licking lips? I’m here because I think it stands for living legend.”

Cool J then did a medley of his hits, including “Rock The Bells” accompanied by a bearded Eminem before he was joined by J-Lo for “All I Have.” Cool J wrapped up his blistering set with one of his biggest hits, “Mama Said Knock You Out.”

Superstar Taylor Swift opened the show with one of King’s best-known songs, “Will You Love Me Tomorrow,” which appeared on “Tapestry” her seminal 1971 album — a soundtrack for a generation.

Swift gave a moving, heartfelt induction speech for one of her musical idols.

“I can’t remember a time when I didn’t know Carole King’s music,” Swift said, saying her parents taught her several important lessons as a child with one of the most important being “that Carole King is the greatest songwriter of all time.”

King thanked Swift “for carrying the torch forward.” She noted other female singers and songwriters have said they stand on her shoulders.

“Let it not be forgotten,” King said. “They also stand on the shoulders of the first woman inducted into the Rock & Roll Hall of Fame. May she rest in power, Miss Aretha Franklin.”

King then introduced Jennifer Hudson, who performed a stunning, rafter-shaking performance of “(You Make Me Feel Like) A Natural Woman” before King sang “You Got A Friend.”

The 81-year-old Turner, who found her greatest success when she left abusive husband Ike Turner, lives in Switzerland and did not attend the ceremony.

“If they’re still giving me awards at 81,” Turner said in a video message, “I must have done something right.”

Keith Urban and H.E.R. performed “It’s Only Love,” a duet Turner did with Bryan Adams, before Mickey Guyton took on her most iconic song, “What’s Love Got To Do With It.” Then Christina Aguilera belted out “River Deep, Mountain High.”

Considered the greatest female group in rock history, The Go-Go’s emerged from Los Angeles’ punk scene in the 1980s. The quintet broke rules and smashed gender ceilings in a male-dominated industry with hits like “We Got The Beat,” “My Lips Are Sealed” and “Head Over Heels.”

“They’ve been in my personal Hall of Fame since I was 6 years old,” said actress Drew Barrymore, who mimicked the cover of the band’s debut album, “Beauty and the Beat,” during her induction speech by wrapping her body and hair in bath towels and applying face cream.

“Now,” she said, “My childhood fantasy is fulfilled.”

Best known for soft ballads like “Hello It’s Me” and “Love Is The Answer,” Rundgren also had a long path to induction. He’s been outspoken about the hall’s selection process and skipped the ceremony in protest.

“Ever defiant,” Patti Smith said in a video presenting Rundgren.

This year’s ceremony was held for the first time at Rocket Mortgage FieldHouse, the 20,000-seat home of the NBA’s Cleveland Cavaliers and a venue familiar to Jay-Z and Foo Fighters, who have played shows in the arena before.

It was a return to normalcy for the event, which was forced to go virtual in 2020 due to the COVID-19 pandemic.

Artists are not eligible for induction until 25 years after release of their first recording. There are lively debates every year over omissions, and as Public Enemy’s Chuck D noted during a plaque induction ceremony on Friday at the hall, patience is sometimes another requirement for entrance.

“It ain’t no overnight thing,” he said. “You can’t stumble into this place.”

That was certainly the case for King, who had been eligible for enshrinement as a solo artist since 1986. She went in previously as a songwriter with Gerry Goffin, her late husband, in 1990.

The ceremony will be shown on HBO on Nov. 20.