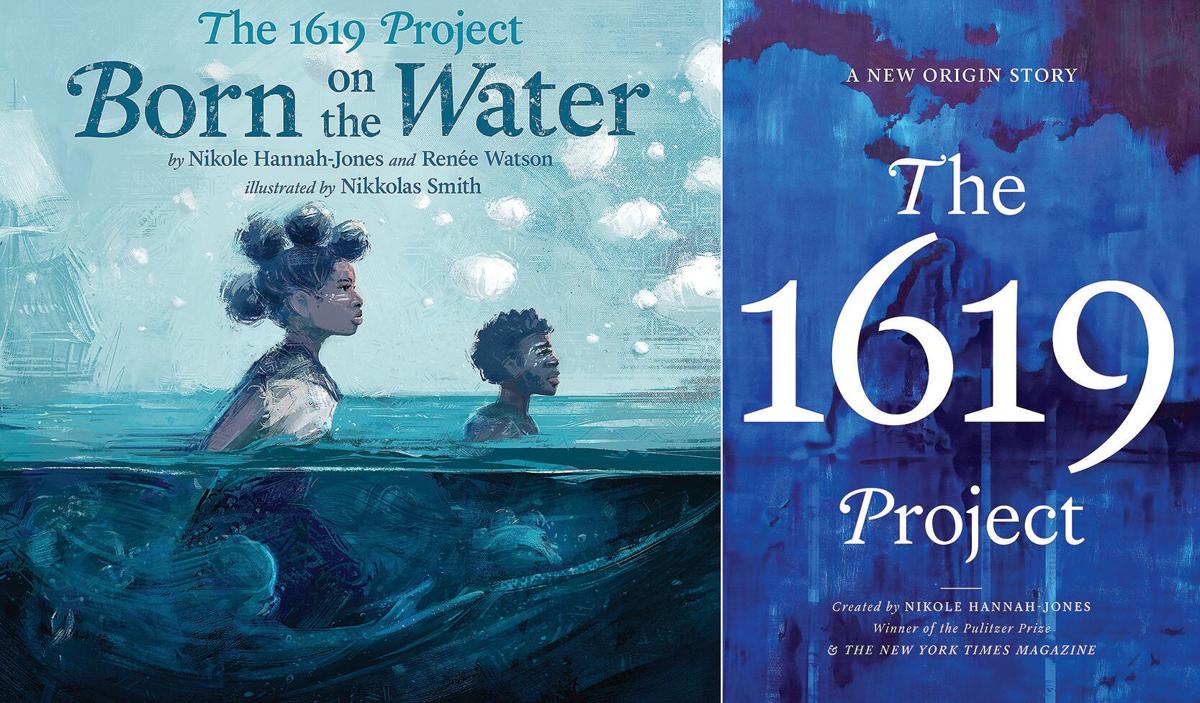 This combination photo shows cover art for “The 1619 Project: Born On the Water” based on a student’s family tree assignment, with words by Hannah-Jones and Renee Watson and illustrations by Nikkolas Smith, left, and “The 1619 Project: A New Origin Story.”

Thais Perkins is the owner of Reverie Books in Austin, Texas, and the parent of a middle school student and high school student. Among the books she is eager to have in her store, and in the schools, is an expanded edition of “The 1619 Project” that comes out this week.

“My store is a social-justice oriented bookstore, and this book fits very well within that mission,” she says. “I am promoting community sponsorships of the book, where people can purchase a copy and have it donated to one of the schools.”

That is assuming, of course, the school will be allowed to accept it.

The “1619 Project,” which began two years ago as a special issue of The New York Times magazine, has been at the heart of an intensifying debate over racism and the country’s origins and how they should be presented in the classroom.

The project has been welcomed as a vital new voice that places slavery at the center of American history and Black people at the heart of a centuries-long quest for the U.S. to meet the promise — intended or otherwise — that “all men are created equal.

At the same time, op- position has come from such historians as the Pulitzer Prize winner Gordon Wood, who denounced the project’s initial assertion that protecting slavery was a primary reason for the American Revolution (the language has since been amended) and from Republican officials around the country.

Sen. Tom Cotton, of Arkansas, has proposed a bill that would ban federal funding for teaching the project, and the Trump administration issued a “1776 Commission” report it called a rebuttal against “reckless ‘re-education’ attempts that seek to reframe American history around the idea that the United States is not an exceptional country but an evil one.”

In 2021, Republican objections to the 1619 project and to critical race theory have led to widespread legislative action According to Jonathan Friedman, director of free expression and education at PEN America, dozens of bills around the country have been proposed or enacted that call for various restrictions on books seen as immoral or unpatriotic. Two bills passed in Texas specifically mention the 1619 project.

“When you look at the current movement about critical race theory, you can see some of its origins in the fight over the 1619 project,” Friedman says.

The Texas laws, Friedman says, are “opaque” about how or whether a given school such as the ones attended by Perkins’ kids could receive a copy of the 1619 book. He cites a passage which reads “a teacher, administrator, or other employee of a state agency, school district, or open-enrollment charter school may not ... require an understanding of the 1619 Project .”

The provision “effectively bars a teacher from teaching or assigning any materials from the 1619 Project,” he says, but not the school library from stocking it — especially if the book has been donated.

A spokesperson for the Austin Independent School District says in a statement that the “academics team is currently working on this internally, and we are not yet able to speak to the issue.”

The 1619 book appears destined for political controversy, but it’s also a literary event. Contributors range from such prize-winning authors on poverty and racial justice as Matthew Desmond, Bryan Steven-son and Michelle Alexander, to Oscar-winning filmmaker Barry Jenkins, to “Waiting to Exhale” novelist Terry McMillan and author Jesmyn Ward, a two-time winner of the National Book Award for fiction. Along with essays on religion, music, politics, medicine and other subjects, the book includes poetry from the Pulitzer winners Tracy K. Smith, Yusef Komunyakaa, Rita Dove and Natasha Trethewey.

“It’s just such an amazing part of this book,” Hannah-Jones says of the poems and prose fiction. “It gives you these beautiful breaks between these essays.”

“The 1619 Project” book already has reached the top 100 on the bestseller lists of Amazon.com and Barnes & Noble.com. Online seller Bookshop.org has set up a partnership with the publisher One World, an imprint of Penguin Random House, for independent stores such as Reverie Books to donate copies to local libraries, schools, book banks and other local organizations.

Hannah-Jones says that reaching class- rooms was not on her mind when she conceived of “The 1619 project,” but that schools have become important outlets. Through a partnership with the Pulitzer Center, which has teamed with the Times before, the project has been embraced by dozens of schools and educational centers around the country, from high school history faculty in Baltimore to grade school- teachers in Ann Arbor, Michigan, to the advocacy group Texas Trailblazers for Equity in Education.

Hannah-Jones has a second book out this week. The Penguin Random House imprint Kokila is publishing the picture story “Born On the Water,” a collaboration among Hannah-Jones, co-writer Renée Watson and illustrator Nikkolas Smith that Hannah-Jones says she was inspired to work on after readers of the Times magazine asked for something addressed to younger readers.

It is a mini-history, with verse and images, that traces centuries of Black lives from their thriving communities in Africa to their forced passage overseas and enslavement to their hard-earned freedom. Those once “brokenhearted, beaten and bruised” became “healers, pastors and activists,” Hannah-Jones and Watson write, “because the people fought/America began to live up to its promise of democracy.”