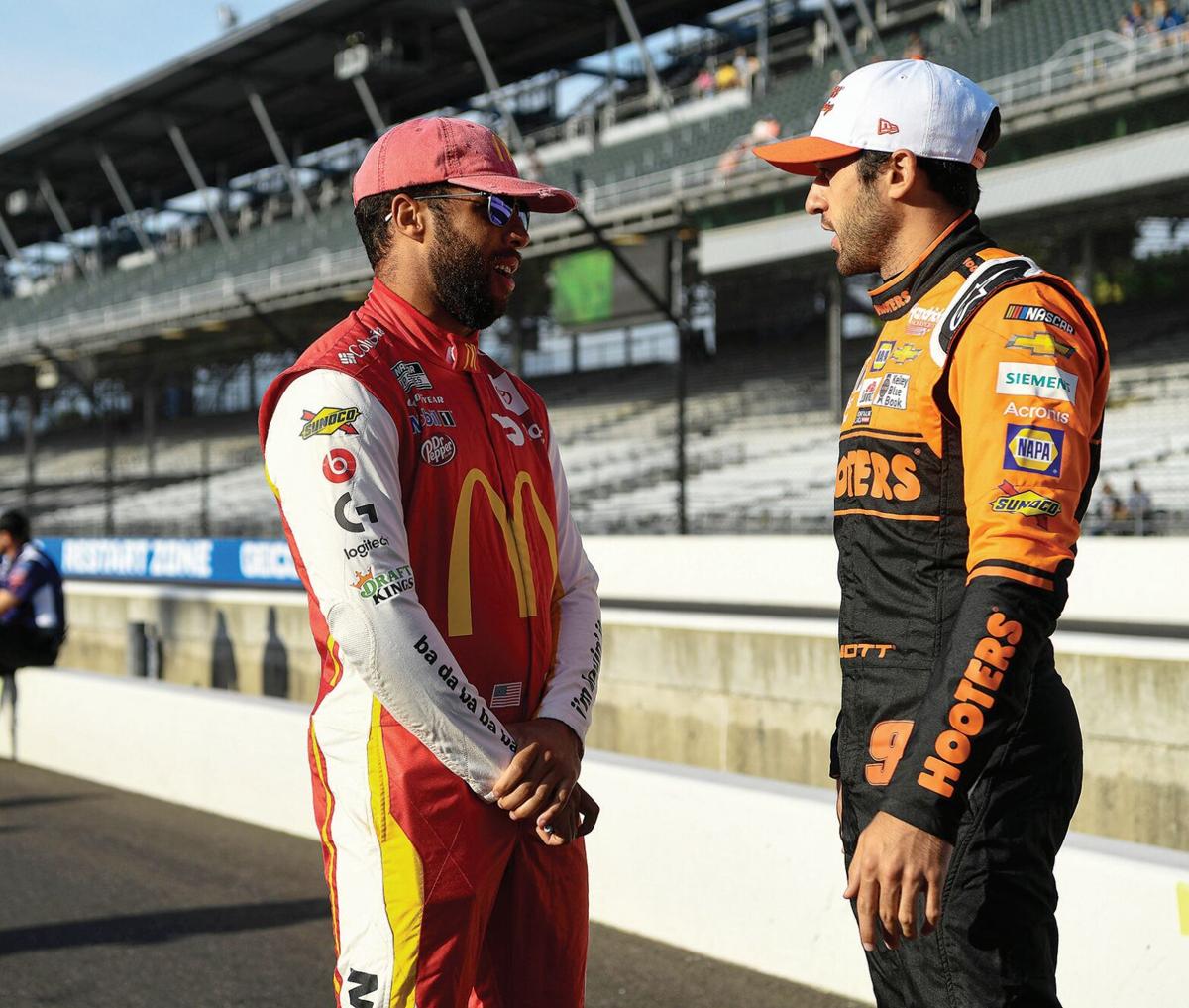 NASCAR drivers Bubba Wallace (23) and Chase Elliott (9) chat on the pit lane the ornign of Aug. 15 before starting the qualifying round for the Verizon 200 at the Brickyard at Indianapolis Motor Speedway.

The NNPA is the global media partner for the African Renaissance and Diaspora Network (ARDN), an advocacy and marketing partner of the United Nations. Last year in the wake of George Floyd’s death, and the civil unrest that ensued, civil rights organizations, business entities, and sports organizations came out in full force to support abolishing racial injustices, racism, and police brutality.

The NNPA had an opportunity to interview Chris Miles, Global Motorsport marketing advisor, and Diversity & Inclusion strategist for ARDN, as well as principal owner of Starting Grid, Inc., to get his opinion on the diversity initiatives that were being created from the various motorsport sanctioning bodies around the world, in hopes of welcoming a new generation of fans, industry professionals and sponsors.

NNPA: In your opinion, what would you attribute the dismal success rate of NASCAR’s “Drive For Diversity” program not having other Black drivers competing in NASCAR’s other series?

CM:  NASCAR’s leadership, without question. Blame must be placed at the top of the heap, and it begins with former Chair- man/CEO Brian France, to now NASCAR Chairman/CEO Jim France, Brian’s uncle, to even Brian’s sister Lesa France Kennedy, CEO of International Speedway Corporation and Executive Vice Chairman of NASCAR. ISC used to be the publicly traded parent company of NASCAR, of which the France family owned about 35% of ISC and managing control.

Today, NASCAR now owns ISC through a stock purchase and has taken it back to being privately owned.

That within itself is an interesting turn of events if you ask me. Nevertheless, you start with France’s, and then you blame all of the sponsors that have paid millions of dollars in support of the D4D program and have allowed this misappropriation of funds to take place for all these years. Where else on the planet can a Black man, Max Siegel, have another full-time job as the CEO of USA Track and Field, be the head of the D4D program since 2009, be in control of millions of dollars, and only produce one Black driver in their top tier champion- ships without being fired for incompetence?

NNPA:  So it’s safe to say, in your opinion, there is no real sincerity in NASCAR’s D4D program?

CM:  Absolutely not! It’s been in existence 17 years and has nothing to show for it, except one driver in their three touring championships, a handful of pit crew workers and five or six drivers, per year, getting a chance to compete in one of the lowest, and cheapest, entry-level stock car series.

Although having said that, I guess it has proven one thing. Either NASCAR’s D4D selection committee, who picks the driver candidates, have gotten it wrong these past 17 years — or they have failed to find another Darrell Wallace, Sr. who has the financial means to pay for another driver to make it up the ranks.

NNPA: That is a good point.

CM:  So, in comparison, let’s look at it this way. Lewis Hamilton became the first Black driver in Formula One’s history back in 2007. Here’s a list of his accomplishments in 14 years of racing in Formula One.

Lewis is a seven-time Formula One World Champion. He is the all-time leader in race wins with 99, he has 173 podiums and 101 pole positions, and he now makes $55 million a year! You tell me if NASCAR’s D4D program is an “intentional” or “authentic” driver development program?

NNPA:  You mean to tell me that brother makes $55 million a year for driving a race car?

CM:  He damn sure does, and he has earned every penny of it, too. Now I’ll say this without letting Formula One off the hook.

The series itself has not been responsible for Lewis Hamilton’s historic career. And to this day, Formula One does not have a driver development program for persons of color.

They have a complete program for women but nothing to support persons of African descent. A gentleman named Ron Dennis headed up the Formula One powerhouse McLaren Racing that had won multiple world championships, many races won and had the best drivers racing for them, which included legends Ayrton Senna and Alain Prost. So again, to make a comparison, Ron Dennis is not as wealthy as Roger Penske. Still, he utilized his position within a World Championship winning organization to embrace the Black Brit Lewis Hamilton, assist his ascension in the sport by signing him at the young age of 13 —. In contrast, that thought never, ever crossed Roger Penske’s mind to have a driver of color race for him.

NNPA: Now at the time of our interview last year, you shared that INDYCAR had just announced a diversity program. How would you classify their program compared to NASCAR?

CM:  The “Race For Equality and Change” is a mirror image of NASCAR’s “Drive For Diversity” program because it is led by individuals who have other jobs.

This is not their focus, no matter what they say, and it will tragically yield the same results— because it was doomed from the start.

CM: Penske Entertainment Corporation created this program out of thin air after Willy T. blasted them in a July 1, 2020, IndyStar interview following INDYCAR’s halfhearted statement regarding their firm stand against prejudice and racism weeks after George Floyd’s death.

Their statement was nearly identical to the one NASCAR put out days earlier. They were not a leader, but a perennial follower. Nevertheless, Willy was spot on in his comments on July 1, stating that F1 was leading the way with diversity because of Lewis Hamilton. NASCAR was 50 years too late, but they had Darrell Wallace, and INDYCAR was in last place because they had nothing.

But then miraculously three days later, when INDYCAR and NASCAR were at the Indianapolis Motor Speedway competing for the first time together at the same racetrack, Penske Entertainment Corporation announces the “Race For Equality and Change” initiative, with it being funded by $1 million— give me a frickin’ break.

It was an absolute embarrassment and an insult to our intelligence. Now I guarantee you they will say this initiative was in the works for weeks but given how they presented the program and said there would be more information coming out in the coming weeks, just let you know it was thrown together to try and save face.

NNPA: But Roger Penske is a successful businessman, is he not?

CM: He is absolutely is. Roger is a billionaire, and kudos to him and his success — but that has nothing to do with how he runs his racing business and his effort to promote his farcical diversity initiative as “authentic.”

NNPA: So, do you not believe INDYCAR’s diversity program has a chance to be successful?

CM: I’ll say this. When you do not live your life every day, as you now portray you do, everyone will eventually realize the truth behind the magic trick.