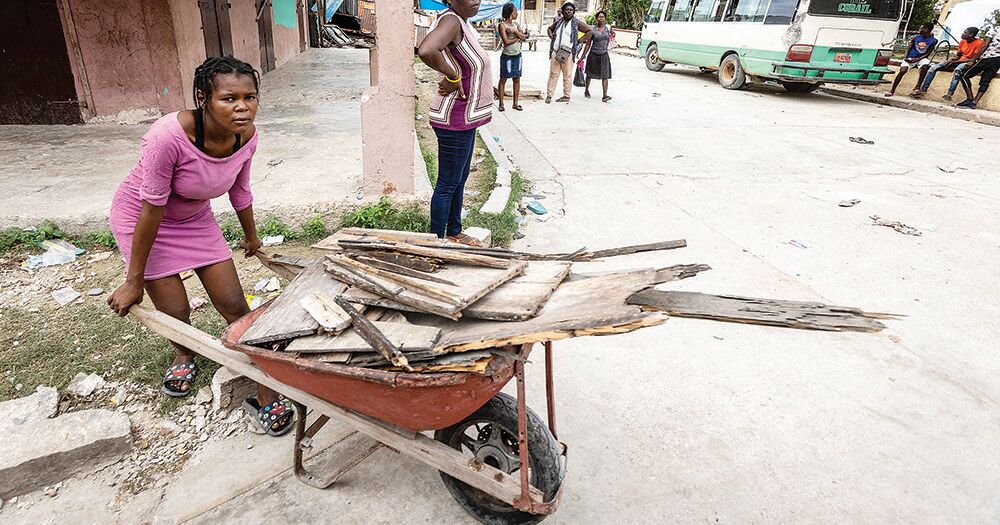 A woman carries salvaged wood on a wheelbarrow through the street in Corail, Haiti, on Aug. 19. Many structures in this small fishing village were damaged or destroyed by the earthquake. 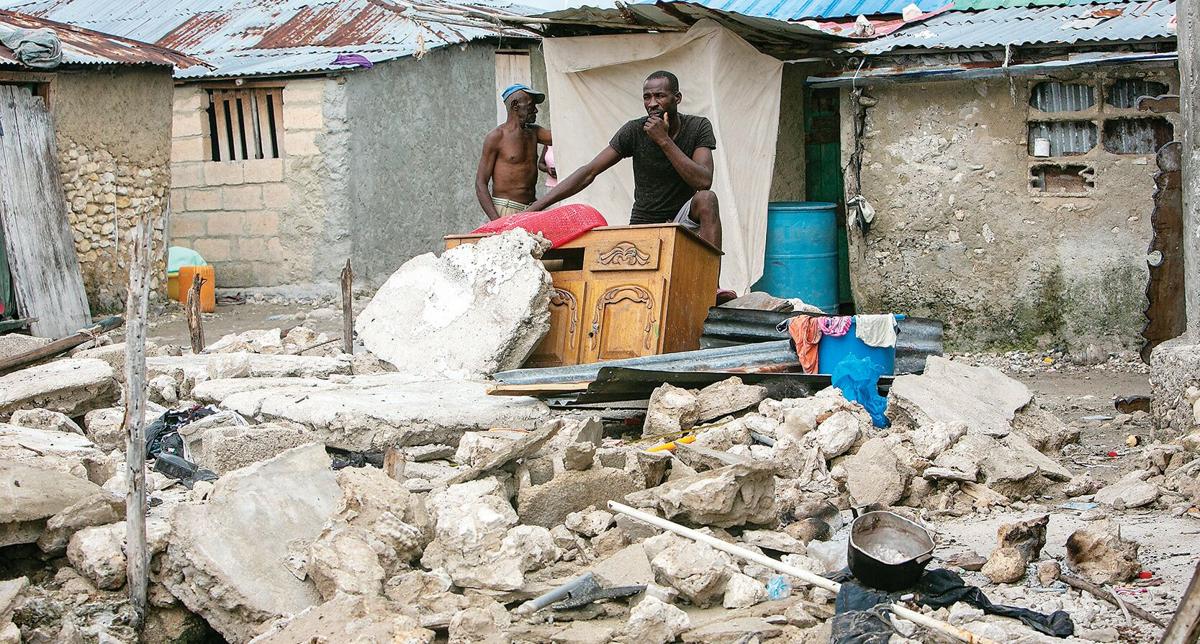 A man stands on the rubble of a house in the village of Boucan Noel, Haiti. Many homes in this fishing community were damaged or completely destroyed by the earthquake.

There is no hospital, no dispensary, no drinking water, no chlorine purifier. In this far remote corner of southern Haiti, inside a green hamlet of overhanging palm trees, rocky roads and white sand, a poor fishing village stands alone.

The structures — homes, churches, schools — that weren’t flattened by the deadly 7.2 magnitude earthquake that shook the western reaches of southern Haiti are barely standing.

Cracks run through the concrete of once upright buildings, winding along their sides, like badly fitting pieces of a jigsaw puzzle.

The people of Boucan Noël were already struggling to recover from 2016’s Hurricane Matthew, which battered their oceanfront hamlet with ferocious winds and waves before the ground buckled on Aug. 14.

Now, they are left to fend for themselves amid ruin as they rely on brackish, contaminated water from the nearby Lacombe River to drink and bathe, sleep on pavement along a main street strewn with fallen cement blocks, and wonder if the next aftershock or the next torrential downpour will be the one to finally bring down what little is left.

Five days after the quake, no official from outside had come to survey the damage or offer aid. The injured were taken by water to nearby Corail.

More than a week later, as aid distribution rolled out in the quake zone, villagers said there was no potable water, no food and no assistance in the community of 5,000 where more than 100 houses have either been damaged or destroyed.

“I’m sleeping in the streets. I feel so dirty,” said Nevil Dauphin, 43, whose home had already been destroyed by Matthew. “Everything is against me.”

Since “the event,” which is how Haitians refer to the Aug. 14 earthquake that rattled three departments south of the Haitian capital, the Lacombe River has become drier, its water browner.

While some residents of neighboring Corail, a larger community, are afraid to drink the water out of fear it is polluted, the people of Boucan Noël say they have no choice.

The drinking of untreated water in the quake-ravaged zone has led to concerns of waterborne disease, including a return of cholera, which Haiti has been battling since it was introduced by Nepalese peacekeepers 10 months after the last big earthquake, Jan. 12, 2010.

We are used to it. We just accept it,” said Dauphin, cupping his hands inside a red bucket to show the water’s brownish tint.

Acknowledging the risks of using the water, he added: “I don’t know what bacteria is in me.”

The official death toll from the earthquake is at more than 2,200, with another 334 people still missing, while more than 12,200 were injured. Miraculously, the fishing village, located 105 miles west of Port-au-Prince on the outskirts of the town of Corail, in the district of Jérémie in the quake-ravaged Grand’Anse region, registered only six deaths and five injuries, said Ancelot Fremont, a member of the local administration.

It is still too many deaths, say residents, who have pulled out tattered, five-year-old U.S. Agency for International Development tarps to make their own temporary shelter in the days since.

“We are not well,” said Mertilia Zamor, 65, standing in front of her house, which is covered with borrowed sheets of US- AID tarps for walls. “We’ve been forgotten. We don’t have anything. We are asking for relief.”

Despite the devastation, the fishing hamlet pulses with life. Boys play soccer on a field made of beach sand instead of grass. Girls giggle over baby dolls, and woodworkers build their next canoe.

Near the center of Grand Rue, or main street, children laugh inside a tarp-covered wooden shack that doubles as a makeshift movie theater by day and sleeping quarters at night.

A few feet away, an oversize tent, parked in the middle of the concrete street, also is full of life as a baby plays in a washtub, women gather to exchange stories and children run up and down in a game of chase.

“I never thought I would need a tent like this,” said Lionel Fremont, wearing an Office of Civil Protection shirt.

Fremont, the disaster preparedness representative, said about 30 people sleep in the tent at night. But he is not one of them, he said, standing underneath an oversize beach umbrella-like covering, fashioned out of black plastic with several white plastic chairs.

“There are people who sleep on chairs,” he said, adding that he’s one of them. “All of the chairs you see in the streets are chairs for people to sleep.”

Since the earthquake, Haiti has experienced 378 aftershocks in 10 days, according to the Dominican publication Diario Libre. The data was collected by the National Seismological Center of the Autonomous University of Santo Domingo. One of the after-shocks registered 6.0.

People are so traumatized by the shaking that they run out into the streets — even from inside the tents, Fremont said. This latest disaster, he said, is far worse than Matthew.

“True, Matthew did a lot of damage; it covered houses,” said Fremont. “But this here, destroyed houses.”

The scope of Boucan Noël’s destruction in a poor country underscores the difficulty that Haitian and international officials have faced in trying to assess the true impact of the disaster. It also shows the challenges ahead as Haiti begins to think about rebuilding.

The widespread nature of the disaster has made everything, from getting people medical care to delivering aid, even more challenging, as demonstrated by the slow pace of the government’s response.

In the first few hours after the earthquake, authorities reported the death toll to be 29. Then it was raised to 173. On Monday, it stood at 2,207 after 24 people, trapped for a week in Pic Macaya, were found alive. Teams continued to dig through the rubble searching for life — and bodies.

“In the first 24 hours, this was a strong earthquake but there was no real sense of the magnitude or the impact,” Achim Steiner, administrator of the United Nations Development Program, told the Miami Herald after visiting Les Cayes last week with U.N. Deputy Secretary-General Amina Mohammed.

Then the helicopters went out. The farther inland, or the closer one got to the mountains, the worse the devastation seemed to be. Hilltop homes hung off mountain cliffs; hospitals had their second floors destroyed; churches had crumbled; and schools were mere concrete shells.

“This was not in a capital city,” he said, a reference to the 2010 earthquake in Port-au-Prince. “This was in a province, a department which has most of its population dispersed.”

In any other Caribbean nation, Boucan Noël, with its white sand and rows of coconut trees, would be the place of million-dollar beachfront homes.

But the rocky drive — it takes 45 minutes to go three miles — dilapidated housing and lack of infrastructure point to its grinding poverty.

While some people farm, most make their living here from fishing. But the lack of boat engines means fishermen cannot go very far in their wind-powered wooden shallop, or wooden canoes.

And the lack of electricity means no refrigeration, so they cannot catch more than they can sell. Even the handmade fishing mesh, which costs about $15, is out of reach for most residents.

“People with means buy these,” Nelsy Pierre-Louis, 36, said as he passed several fishing nets upright against an intact wall.

As he gave visiting Miami Herald journalists a tour of the damage, he apologized for the wreckage.

“This is not a proud moment for us,” he said as he walked down a dirt path with crumbled homes on one side and an area bordered by a line of sticks acting as a gate.

“But we don’t have anywhere else that we can go. We have no choice but to stay.”

Just as the 2010 earthquake in Port-au-Prince exposed Haiti’s culture of largely unregulated construction, so too did the August temblor that rocked the Grand’Anse, Southwest and Nippes regions.

The majority of homes in Boucan Noël are made with local materials like limestone rock and cement blocks that have been made of salty beach sand with little if any steel reinforcement.

It’s the same poor construction that caused homes in Port-au-Prince to collapse in 2010. In Corail, the entire town lies in ruin and even the wooden houses weren’t spared.

“There isn’t just one category of people who are victims. Everyone’s a victim,” said Amaral Louis, 41, a Corail teacher.

Though there are several quake fault lines running through Haiti, Louis remarked that earthquakes are not something Haitians from this region are used to.

“In 2010 when the earthquake happened in the west, it didn’t really affect us in the Grand’Anse,” he said. “The morning of the 14th of August was really, really terrible. We suffered a lot.”

The last time a powerful earthquake hit the south and did significant damage was Oct. 27, 1952. Anse-à-Veau, which is today part of the Nippes region, was devastated, with 80% of the wooden houses partially destroyed and 20% totally destroyed, according to a report published by the country’s chief seismologist, Claude Prépetit.

At the time of the 1952 quake, President Paul Eugène Magloire sent two experts to Anse-à-Veau to explain to the population what earthquakes were.

Prépetit wrote the re- port in 2015 after a quake rattled the people of the area. He pointed out that the sand and gravel used to make brick blocks, mortars and concrete are taken from the bed of the Anse- à-Veau River and the lime- stone quarries of Miragoane and Cahouc.

“These materials do not necessarily respond to the standards required by the construction and no control of the building is carried out by the authorities,” he said at the time.

The government of Haiti, along with the United Nations, the World Bank and other entities, are currently preparing a post-disaster aid assessment to collect the necessary data in order to rapidly provide materials and other reconstruction needs.

Whether any of the assistance will reach their corner of Haiti remains to be seen, say the people of Boucan Noël.

“We survived the earthquake,” Pierre-Louis said, picking up clothes hanging off wooden fences and pieces of concrete slabs. “But we’re not living.”